Every once in awhile a job comes around that you just can’t pass up. I was called in to give a proposal to remove two large blue spruce trees adjacent to a house slated for demolition. We were to stack the brush at the curb and leave the logs for the demolition contractor to haul off.

We go to great pains to avoid property damage when removing trees, employing ropes, blocks, lowering devices, and sometimes cranes. However this job was too good to be true- it did not matter if the house was damaged. I approached the owner and asked if we might do some pre-demolition and drop the trees onto the house. He was open to the idea and willing to sign a damage waiver that I eagerly presented.

The job day arrived and we went to work. I spurred up the tree and we stripped off the brush and then proceeded to drop the top of the tree through the attic. By this time people started to notice that this was no ordinary tree job. There were concerned bystanders and cat calls from motorists that we didn’t know what we were doing. People started to get really concerned when we dropped the second tree through the front porch. The job was a lot of fun and a big change from the normal procedure of no damage to the house. It would have been easier and faster to drop the trees away from the house but I couldn’t pass this up. All of that pent up angst of not causing damage dissipated, if for only a day. The newspaper received a number of calls from concerned citizens wondering if anyone had been hurt when the trees came down on the house. The only damage that would have mattered is the image of the company as the uninformed observer thought they saw a tree removal gone horribly wrong.

If I had to do it over again I probably would- just in unmarked company vehicles. 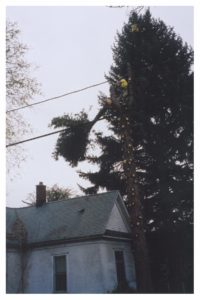 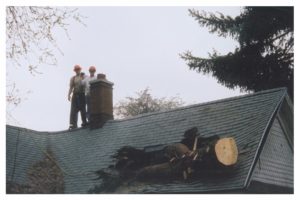 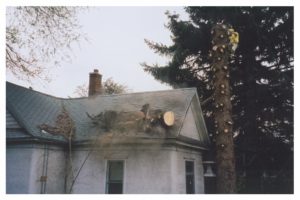